The Public have their say at second Eddeva Park consultation

The second in a series of public consultations was held for people to have their say on amenities they would like to see included as part of the new Eddeva Park development.

Hosted by developers, This Land, on July 29th, the community engagement forum at Queen Edith Chapel attracted large interest, with visitors being consulted on plans for shops and local facilities at the development site between Worts’ Causeway and Babraham Road.

With outline planning permission having been granted for the 230-home project, there was particular focus at the meeting on how to make best use of a community building that will provide the development’s social centre. Visitors were also handed a questionnaire for their thoughts on the need for a pharmacy, coffee shop, sports facilities, open office space and a children’s nursery at the site. The results of the public consultation will be published in due course.

Furthermore, the final phase of an archaeological dig taking place at Worts Causeway/Eddeva Park prior to the commencement of development work has progressed. Archaeologists from Oxford Archaeology East are undertaking the excavation, which started on July 11th. These Land representatives announced a second round of digs had started, with the intention of finding and preserving artefacts and history of the local area. 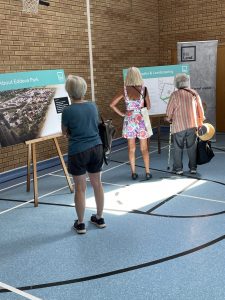 Brenda Kibblewhite, Head of Sales and Marketing at This Land said: “We’d like to thank members of the community for their attendance at our Eddeva Park consultation. We are focused on delivering a development that serves residents to the full. Shops and local facilities are crucial to a local economy and its sustainability, thus it’s important the community has its say on the type of amenities we could provide. We thank attendees for their feedback, which will inform further consultations as development plans progress.”

This Land said future Eddeva Park public consultations would be announced once dates and times had been finalised.

For those that were unable to attend the event, you can view the boards here – Event boards

This Land has been secured outline planning permission for a 230-home development on the south-east fringes of Cambridge. The development, which will be called 'Eddeva Park' sits between Worts’ Causeway and Babraham Road.