The dig is underway 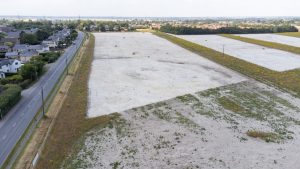 A team of archaeologists have unearthed human remains during the excavation of a Bronze to early Iron Age settlement on This Land’s™ Burwell site, in advance of the development of 350 new homes.

Following the removal of topsoil at the 6.5-hectare site on Newmarket Road, archaeologists have discovered two full human skeletons as well as a vast number of post holes, pits and pieces of pottery which date from 1200-350BC. The number of post holes indicate that there was a large community which used to live at the site, whilst the layout implies the timber structures would have been both round and rectangular in shape. 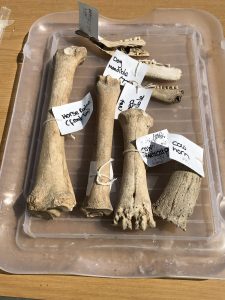 The team also uncovered animal bones and broken pottery which may well have been used to throw away unwanted food remains and other goods.

The excavation of the settlement is the first of two phases being carried by Oxford Archaeology East who are supported by Cambridgeshire County Council (CCC) and appointed by specialist archaeological and heritage consultants Orion. An area identified as a cremation burial ground will be excavated and examined ahead of construction of Phase Two of the scheme.

On completion of the fieldwork, there will be a programme of post-excavation assessment and analysis of the artefacts and environmental samples which will be recorded and followed by a full publication of the results. The information will be built into a story of the site and archived, and the artefacts will be donated to CCC and made available for public viewing.

Commenting on the ongoing archaeological fieldwork Brenda Kibblewhite, Head of Sales and Marketing of This Land™ said: “These are exciting new discoveries and we are delighted with the team’s ongoing work at this historically significant site in Burwell. It’s been fascinating to learn about the history of the site, which will provide an archival legacy of artefacts for future generations to enjoy.”

On the conclusion of the archaeological dig, This Land™ will commence the main infrastructure for the development of a community of 350 new homes, including affordable housing. The scheme will include a mix of housing.

The archaeological dig, which began in May, is expected to be finished in September depending on any further findings.